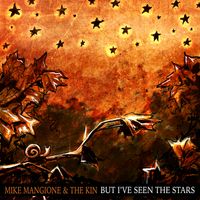 From the recording But I've Seen The Stars

Mike Mangione & The Kin is a touring group rooted by brothers, Mike and Thomas Mangione. American Songwriter Magazine has coined their music, “orchestral folk,” while also imparting their previous release, Red-Winged Blackbird Man, with four stars. Time Out Chicago has aptly described them as, “a more atmospheric take on folk-rock.” Mike’s first album, Tenebrae (2008), was warmly received in the press. All Music Guide selected his work as an “Album Pick," New York Magazine spotlighted the band, while Blurt Magazine referred to the “tear-stained folk, Memphis-styled gospel and bluesy-flavored pop” as “luminous.” In 2010 Mike and Thomas released their follow-up, Offering, on their own imprint, RODZINKArecords, with sync and digital licensing by DUALTONE Records, with their new backing band, The Union. They averaged 100+ dates yearly and toured as far as Asia, Australia, Europe, and Canada.

On September 3rd, 2013, they released, Red-Winged Blackbird Man (RODZINKArecords), produced by Grammy-nominated producer, Bo Ramsey (Lucinda Williams, Greg Brown, Iris DeMent). Shortly, after the album took its course, The Union dissolved, leaving Mike and Thomas (lead guitar) to rebuild. In 2014, Mike began spending time in the Northwoods of Wisconsin to focus on writing his fifth studio record. Not having a band to workshop with, Mike began the writing process for this new record differently, focusing on the rhythm first. Once the rhythm was written, Mike began writing the layers of instrumentation on top of each other, concluding with a new element to his music, vocal harmony. When finished, Mangione went out looking for the players for this new project and was introduced to Chauntee (violin) and Monique Ross (cello) of the band Sistastrings. The sister’s level of musicality with both stringed instruments as well as vocal harmony won Mike over and he quickly brought them into his orbit. Mike needed an accomplished rhythm section for the project and reached out to friends, Josh Collazo (drums) and Seth Ford-Young (bass) of Los Angeles based Edward Sharpe & The Magnetic Zeros. Josh suggested the Magnetic Zeros’ trusty producer/engineer Matt “Linny” Linesch for the role of producer. The band started recording at historic United Recording (Ocean Way) in Los Angeles, CA in the winter of 2015. Since the foundation of the band consisted of two families, the Mangione brothers & Ross sisters, they adopted the name Mike Mangione & The Kin. Their new record, But I’ve Seen the Stars, will debut October 20th 2017 on RODZINKArecords.